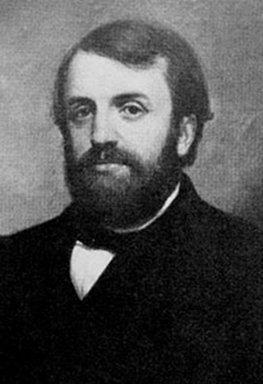 With his boundless physical energy, natural shrewdness, self-confidence, and eternal optimism, Dwight Lyman Moody could have become a Gilded Age industrial giant like John D. Rockefeller or Jay Gould. Instead, he became one of the great evangelists of the nineteenth century. D. L. Moody was undoubtedly one of the most outstanding successful evangelists of his time. The meetings held by Moody and Sankey were among the greatest the world has ever known. They were the means under God of arousing the church to new life and activity, and were the means of sweeping tens of thousands of persons into the kingdom of God. As a man of God who had vigor and an insatiable thrust for truth, we honor Dwight Lyman Moody as one of God’s great generals.

History:  Dwight Lyman Moody was born in Northfield, Massachusetts, to a large family. His father, Edwin J. Moody (1800–1841), a small farmer and stonemason, who died at the age of 41, when Dwight was only four years old; his mother was Betsey Moody (née Holton; 1805–1896). They had five sons and a daughter before Dwight's birth, with twins, a boy and a girl, born one month after Edwin's death. His mother struggled to support the family, but even with her best effort, some of her children had to be sent off to work for their room and board. Dwight too was sent off, where he received cornmeal, porridge, and milk three times a day. He complained to his mother, but when she found out that he got all that he wanted to eat, she sent him back. Even during that time she continued to send them to church. Together with his eight siblings he was raised in the Unitarian church. His oldest brother ran away and was not heard from by the family until many years later.

When Moody turned 17, he moved to Boston to work (after many job rejections) in an uncle's shoe store. One of the uncle's requirements was that Moody attend the Congregational Church of Mount Vernon where Dr. Edward Norris Kirk served as the pastor. In April 1855, at the age of 18, Moody was then converted to evangelical Christianity when his Sunday school teacher, Edward Kimball, talked to him about how much God loved him. With new found faith and vigor for Jesus, Moody wanted to do something great of the Lord, but his church did not see that type of potential in him. Despite his salvation his application for church membership was rejected for a whole year. Finally, on May 4th 1856 he received the membership he so wanted to be a part of. 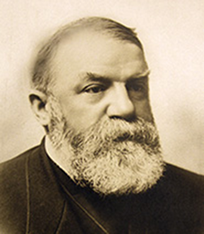 D. L. Moody was even apart of the Civil War. Moody "could not conscientiously enlist" in the Union Army during the Civil War, later describing himself as "a Quaker" in this respect. After the Civil War started, he became involved with the United States Christian Commission of the YMCA, and paid nine visits to the battlefront, being present among the Union soldiers after the Battle of Shiloh (a.k.a. Pittsburg Landing) and the Battle of Stones River; he also entered Richmond, Virginia, with the troops of General Grant. 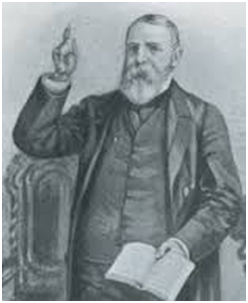 Shortly after that, he moved to Chicago, where he sold shoes and worked toward his goal of amassing a fortune of $100,000. It slowly dawned on Moody that, in light of his new faith, his life should not be spent on amassing wealth as much as on helping the poor. In 1858 he established a mission Sunday school at North Market Hall in a slum of Chicago. It soon blossomed into a church (from which, six years later, was formed the Illinois Street Independent Church, precursor to the now famous Moody Memorial Church). By 1861 he had left his business to concentrate on social and evangelistic work. He drew the children of the German and Scandinavian immigrant underclass to his mission with candy and pony rides, and he drew the adults through evening prayer meetings and English classes. He was convinced, "If you can really make a man believe you love him, you have won him."

In June 1871 at an International Sunday School Convention in Indianapolis, Dwight Moody met Ira D. Sankey, up to then a single-gospel-singer. Moody believed music would be a valuable tool in his evangelistic campaigns, so when, in 1870, he heard Ira Sankey sing at a YMCA convention, he convinced Sankey to give up a well-paying government career to join him on the sawdust trail. Sankey was convinced and agreed, soon they began to cooperate and collaborate together.

Four months later in October 1871 the Great Chicago Fire destroyed Dwight's church building, as well as his family dwelling and the homes of most of his church members. Many had to flee the flames, saving only their lives, and ending up completely destitute. Mr. Moody, who, reporting on the disaster, said about his own situation that: "...he saved nothing but his reputation and his Bible." Moody traveled to New York to raise funds to rebuild the church and the YMCA, but while walking down Wall Street, he felt what he described as "a presence and power" as he had never known before, so much that he cried aloud, "Hold Lord, it is enough!" He returned to Chicago with a new vision: preaching the Kingdom of God, not social work, would change the world. He now devoted his immense energies solely to the "evangelization of the world in this generation." Shortly After his return, his chapel was rebuilt as well.

In the years after the fire, Moody's wealthy Chicago supporter John V. Farwell tried to persuade him to make his permanent home in Chicago, offering to build a new house for Moody and his family. But the newly famous Moody, also sought by supporters in New York, Philadelphia, and elsewhere, chose the tranquil farm he had purchased next door to his birthplace in Northfield, Massachusetts. He felt he could better recover from his lengthy and exhausting preaching trips in a rural setting. Northfield became an important location in evangelical Christian history in the late 19th century as Moody organized summer conferences which were led and attended by prominent Christian preachers and evangelists from around the world. It was also in Northfield where Moody founded two schools (Northfield School for Girls, founded in 1879, and the Mount Hermon School for Boys, founded in 1881) which later merged into today's co-educational, nondenominational Northfield Mount Hermon School.

Ministry and Impact:          In the summer of 1873, Moody and Sankey were invited to the British Isles by evangelical Anglicans William Pennefather and Cuthbert Bainbridge, but both sponsors died before Moody and Sankey arrived. Without official endorsement, Moody and Sankey held campaigns in York, Sunderland, and Jarrow to minimal crowds. In Newcastle, their evangelistic efforts began to reap converts, and from then on their popularity escalated. Literary works published by the Moody Bible Institute have stated that he was the greatest evangelist of the 19th century. Moody preached almost a hundred times and came into communion with the Plymouth Brethren. On several occasions he filled stadia of a capacity of 2,000 to 4,000. In the Botanic Gardens Palace a meeting had an audience between 15,000 and 30,000. 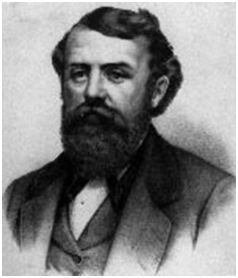 That turnout continued throughout 1874 and 1875, with crowds of thousands at all of his meetings. During his visit to Scotland he was helped and encouraged by Andrew A. Bonar. The famous London Baptist preacher, Charles Spurgeon, invited him to speak, and he promoted him as well. When he returned to the US, crowds of 12,000 to 20,000 were as common as they had been in England. President Grant and some of his cabinet officials attended a meeting on January 19, 1876. His evangelistic meetings took place from Boston to New York, throughout New England, and as far as San Francisco, along with other West Coast towns from Vancouver to San Diego.

Moody aided in the work of cross-cultural evangelism by promoting "The Wordless Book," a teaching tool that had been invented by Charles Spurgeon in 1866. In 1875 he added a fourth color to the design of the three-color evangelistic device: gold—to "represent heaven." This "book" has been and is still used to teach uncounted thousands of illiterate people, young and old, around the globe about the gospel message

Dwight L. Moody visited Britain with Ira D. Sankey, with Moody preaching and Sankey singing. Together they published books of Christian hymns. In 1883 they visited Edinburgh and raised £10,000 for the building of a new home for the Carrubbers Close Mission. Moody later preached at the laying of the foundation stone for what is one of the few buildings on the Royal Mile which continues to be used for its original purpose and is now called the Carrubbers Christian Centre. 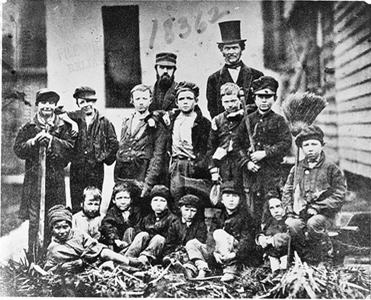 Moody greatly influenced the cause of cross-cultural Christian missions after he met Hudson Taylor, a pioneer missionary to China. He actively supported the China Inland Mission and encouraged many of his congregation to volunteer for service overseas.  His influence was felt among Swedes despite that he was of English heritage, that he never visited Sweden or any other Scandinavian country, and that he never spoke a word of Swedish. Nonetheless he became a hero revivalist among Swedish Mission Friends in Sweden and America.

News of Moody’s large revival campaigns in Great Britain from 1873 through 1875 traveled quickly to Sweden, making “Mr. Moody” a household name in homes of many Mission Friends. Moody’s sermons published in Sweden were distributed in books, newspapers, and colporteur tracts, and they led to the spread of Sweden’s “Moody fever” from 1875 through 1880.

He preached his last sermon on November 16, 1899, in Kansas City, Missouri. Becoming ill, he returned home by train to Northfield. During the preceding several months, friends had observed he had added some 30 pounds to his already ample frame. Although his illness was never diagnosed, it has been speculated that he suffered from congestive heart failure. He died on December 22, 1899, surrounded by his family. Already installed as the leader of his Chicago Bible Institute, R. A. Torrey succeeded Moody as its president. Ten years after Moody's death the Chicago Avenue Church was renamed the Moody Church in his honor, and the Chicago Bible Institute was likewise renamed the Moody Bible Institute.

Before Moody’s death, Moody wrote this about himself: 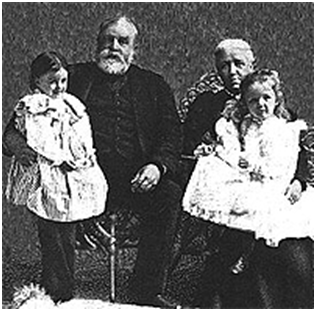