“When you look into the mirror of the Word, you will see your true identity. It reveals your spiritual reality and shows you who you are at the core—within your spirit—so that you can make any necessary adjustments.” 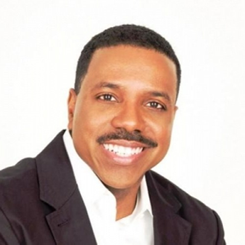 Creflo A Dollar is one of the most influential, spiritually solid, and Biblically sound pastors of our time. With his fundamental belief on God’s love, and the fact that God wants his children to prosper in every way approach; Creflo has been used of the Lord to empower both spiritually and naturally millions of people worldwide.

With humble beginnings in Atlanta Ga, Creflo’s passion, trust, and love for Jesus has enabled him to heights of success that could only be of Gods anointing on his life. With over 30,000 members now meeting in the 8,500-seat World Dome twice a week, and a host of satellite churches in such places as New York City and Battle Creek, Michigan; God has commissioned Creflo to preach a spirit filled Gospel authorized to change the body of Christ for the better. It is with great honor and pleasure that we celebrate Creflo A Dollar as one of Gods great generals.

History:   Creflo A. Dollar Jr was born in College Park, Georgia on January 28, 1962 to his father Creflo A Dollar Sr and his wife Emma. With a somewhat of a traditional American childhood, Creflo grew up going to public schools, playing football, and attending the local Baptist church as a child. Although he was "raised in the church," Creflo Dollar did not become born again until the summer after his freshman year in college. While visiting a Bible study on a college campus in Atlanta, Creflo Dollar gave his life to Christ. It was never his desire to become a minister; instead, he planned to become a professional football player. "There was never any doubt that one day I would play pro ball," he says. "God, however, had a different course for my life. I ended up getting injured and sitting on the bench for much of my college career."

It was this time that Creflo started to see God move in his life. As he was recovering from the injury, Creflo Dollar began witnessing to students on campus. "I witnessed to a guy, and he became born again. Afterward, he brought back 10 more people. Before I knew it, Ken (his college roommate) and I were running a Bible study in our dorm room." This weekly Bible study was known as "World Changers Bible Study." 1981 marked the official beginning of Creflo Dollar’s life in ministry. The teachings captivated the attention of students who were in search of answers to life's questions, and attendance quickly grew to over 100 people. One of the students Creflo Dollar led to the Lord was Taffi Bolton, who became his wife five years later. He graduated in 1984 with a B.S. in education and promptly went to work at Brawner Psychiatric Institute in Atlanta. Creflo Dollar later went on to earn a master’s degree and a Doctorate of Philosophy degree in counseling. Although he was successful at counseling those in his care, he knew that God had given him a clear assignment–to teach the Word with simplicity and understanding.

Ministry and Impact:    In 1986, a year before he left Brawner to enter full-time ministry, Creflo Dollar officially founded World Changers Ministries Christian Center (WCMCC). Its first worship service was held in the cafeteria of Kathleen Mitchell Elementary School, with only eight people in attendance. The location held a special significance for the budding ministry, as Creflo Dollar had been the first black male to integrate the school, where his mother was once employed as a cafeteria worker. The church adopted Proverbs 4:7 as its motto: "... Wisdom is the principal thing; therefore get wisdom: and with all thy getting get understanding” (KJV) Creflo Dollar perfected his gift for taking the complex language and principles of the Bible and converting them into a practical form that simplified things for the listener. Within two years, the cafeteria could no longer hold the larger number of attendees, so the ministry began its search for a new location. It negotiated for and purchased the former Atlanta Christian Center Church in College Park, Georgia. WCMCC held its first service in that facility in 1988.

The ministry continued to grow at a rapid pace over the next few years and began holding four services each Sunday to accommodate the explosive membership growth. In 1991, WCMCC broke ground to build a new sanctuary, and in response to its growing membership and influence around the world, the ministry changed its name to World Changers Church International (WCCI). As God has led Creflo in his life to discover the will of God by faith, this next task would be no different; other than the fact that this was the biggest thing Creflo and his church had believed up to this point. Let’s just say, God honored it! 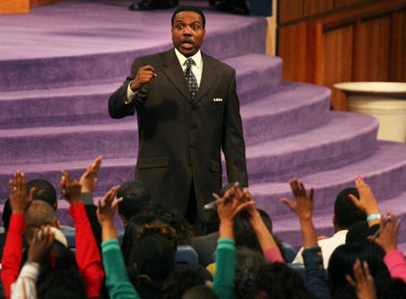 On December 24, 1995, the leaders and members of WCCI moved into the World Dome, which has a seating capacity of 8,500. Unlike any other structure in the community, this magnificent building was truly built by faith, at a cost of nearly $20 million, without any bank financing. To this day, the ministry faithfully continues to extol the virtues of debt-freedom trusting God to initiate and complete new projects without the added burden of debt. The construction of the World Dome, by a growing church with only a few thousand dollars in the bank when the project began, remains a model that ministries all over the world continue to emulate. It is a testament to the miracle-working power of God, when you trust Him as your source.

God continues to honor Crelfo’s faith today with his vision for God’s word and ministry. The church now has a congregation of approximately 30,000 members, and nearly 700 employees staff the facilities of WCCI both at home and abroad. Within the six buildings on the main campus are a state-of-the-art television studio; a computer graphic design suite; a publishing house; a high-tech music studio; a food distribution center; a large banquet facility; commercial cooking facilities; a daycare center; a Christian academy; a Christian bookstore; an audio and video duplication center; and a professionally-staffed fitness facility. The spiritual growth experienced by WCCI members and employees and the hundreds of thousands of CDM partners worldwide proves that clarity and simplicity are still the hallmarks of Creflo Dollar's ministry. "Nothing blesses me quite like the testimonies of people whose lives have been changed by our ministry," says Creflo Dollar. "We have been entrusted with an awesome responsibility to share the Good News with those who need it."

With so many divisions and affiliates of WCCI, God has enabled this ministry to meet the diverse needs of people around the globe. The church arm of the ministry is situated in metro Atlanta, but has such committed and devoted members to the philosophy of Creflo’s teaching of God’s word. People commute from several surrounding states, including Tennessee, South Carolina and Alabama. Creflo Dollar’s dynamic, yet practical teaching style impacts people so strongly that they gladly make the drive. As he famously says, "A church alive, is worth the drive." In addition to four weekly Bible services and a Sunday worship service in Atlanta, the ministry also provides Saturday worship services at its second location—World Changers Church-New York—which began in October 2004. The church currently hosts more than 6,000 worshippers each week and is making a tremendous impact in the greater New York area. 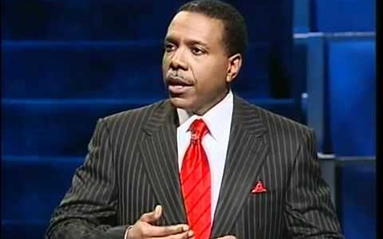 Creflo Dollar Ministries (CDM), the outreach arm of WCCI, hosts annual conventions in cities across the United States. Creflo Dollar’s vision is also supported by thousands of Vision Partners around the world who assist him in spreading the Gospel through the aid of prayers, volunteerism and financial support. The Social Services arm of WCCI makes a daily investment in people's lives by meeting their physical, financial, emotional and spiritual needs through some 60 programs and ministries. Some of the innovations Creflo Dollar has implemented include the Career Development Center, where people receive the information, guidance, training and practical assistance they need to obtain and maintain suitable employment, and where some 50 percent of referrals are hired; a food distribution facility, which provides over 60 tons of food to needy families annually; and the Joseph Project, a male-mentoring program that provides a pathway out of despair for men who have hit rock bottom in their lives. Creflo Dollar also founded the Creflo Dollar Ministerial Association (CDMA), a covenant fellowship of affiliated ministries in the United States and abroad to assist ministers, pastors, evangelists, ministry leaders and churches, large and small, in the fulfillment of their God-given visions. Members have access to a long list of benefits, support services and ministry resources designed to optimize their effectiveness, including Web site development, workshops and conferences on the "how–to’s" of ministry, organizational structure and logistical support, and opportunities to network with like-minded men and women of God. 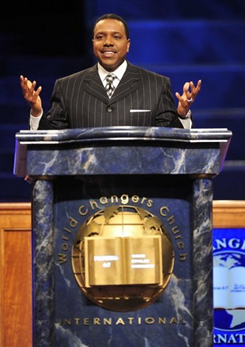 With all his Godlike success, Creflo Dollar is a much sought-after conference speaker and a best–selling author, with hundreds of books, CDs, audio and videotapes in worldwide distribution. He has written books that cover a variety of topics, including debt cancellation, healing, total-life prosperity, prayer, marriage, child-rearing, the Christian family and victorious living. Many of his past works, including The Anointing to Live, Understanding God's Purpose for the Anointing, No More Debt and Live Without Fear, have been added to the curriculum of Christian colleges across the United States. In fall 2006, Creflo Dollar released Claim Your Victory Today, a revised edition of the Divine Order of Faith and in 2008, his life-changing book, 8 Steps to Create the Life You Want: The Anatomy of a Successful Life was released. With such a plethora of curriculum, God has used Creflo to not just change lives, but to bring total and complete life change with thousands of testimonies pouring in daily. With Creflo’s rhema understanding of righteousness and God’s love and plan for his people, his impact on the world wide body of Christ is nothing short of spectacular. 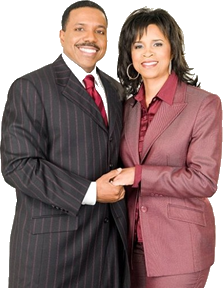 Family: Creflo and Taffie met at one of Creflo’s college bible studies. According to Taffie, it was love at first sight and she prayed and asked God for a husband like Creflo. Several years later the two got married, and have been together for 21 years. They share 5 blessed children together, 3 girls and 2 boys, and of the two, the boys were adopted. Today they continue to grow as a family, and working in ministry together. Despite different hardships throughout their lives, Creflo, Taffie, and their 5 children remain a happy and strong Godly family, and a great example to the body of Christ.

On a personal note: "Dr. Dollar impacted me in ways that only he could have. He introduced me to Righteousness, and it changed me forever. He saved my life. I'll never forget the first time I met him; I stepped in front of the path he was walking and asked him if he would pray for me. He wrapped his arms around me, prayed over me, kissed my cheek and told me he loved me. I don't remember what he prayed, but I do remember the love I felt in this wonderful man of Gods arms. I will always be thankful to The Lord, for making this man who he is, and what he has been to my life." -Philip Helmintoller