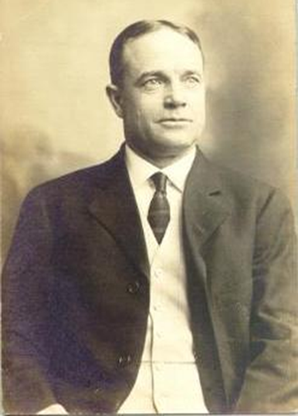 Billy Sunday was one of the most celebrated and influential evangelist in America during the first two decades of the twentieth century. His quick witt and powerfully sharp tong captured the spirits of men and women of all social classes during a time of outright social rebellion. It was because of his own theological perspective, homiletic skill and hard hitting preaching style that impacted and changed Americans hearts toward the word of God. It is estimated that, over the course of his career, he addressed more than a million people, meaning that he may have personally preached the Christian gospel to more people than any other person in history up to that time. It is because of these achievements, that we are honored to consider him one of God Generals.

History:  William Ashley Sunday was born November 19, 1862, near Ames Iowa. His father William Sunday Sr, was a German brick layer and later became a union infantry solder. 4 months after enlisting, and 5 weeks after Billy’s birth, William passed away in Patterson, Missouri due to desiese. His mother, Mary Jane (Corey) Sunday and her 3 boys were forced to move back in with her parents on her father’s farm. Several years later Mary Jane would re-marry, however, her second husband soon after would desert the family, and leave them barren. By the time Billy Sunday was 10 years of age, his impoverished mother could no longer bear the responsibility of raising her children. Sadly, Mary Jane gave Billy and his younger brother over to the Iowa Soldiers' Orphans' Home in Davenport, Iowa. By the time Billy was 14 he had left the orphanage to pursue his own way in life. His short journey took him to Nevada, Iowa where he became acquainted with Colonel John Scott, a leading citizen and the state's Lieutenant Governor.

Sunday attended Nevada High School, also working as a janitor and doing chores for Colonel Scott, who provided him with room and board. He continued to play noteworthy baseball in Nevada, and in Marshalltown where he moved to take a job in a furniture shop. In Marshalltown he was discovered on the city team by Adrian Anson, captain of the Chicago baseball team then known as the White Stockings (today known as the Cubs). Billy rose to the major leagues in 1883 after trying out for the team. He remained a professional baseball player from 1883 to 1890 for Chicago, Pittsburgh, and Philadelphia. He even held the National League record for running bases in fourteen seconds. His record of ninety-six stolen bases in one season was exceeded only by Ty Cobb's mark of ninety-eight.

By 1891 Billy had begun to divide his time and himself between baseball and the Chicago Y.M.C.A. The spirit of his mother's nurturing love and his biblical training in the orphanage was catalyst for his spirit to be awakened, which influenced Sunday to change his life. Turning down an offer of $500 a month to play with Cincinnati's National League Club, Billy accepted an $85 a month job with the Chicago Y.M.C.A. His reputation as a ball player provided natural appeal to the young men he worked with. He attended Northwestern University where the study of Psychology reinforced his love of people and contributed to the mastery of audiences. After three years with the Y.M.C.A., he went to work with J. Wilbur Chapman, well known Presbyterian evangelist. Billy Sunday's first platform appearance was in Garner, Iowa, in 1896. It was here that he first became aware that his direct, sincere manner of speaking and how it got through to people.

In 1903 he was ordained into the mainline Presbyterian denomination of his day. He became known as the Baseball Evangelist, using his baseball background, slangy language, flamboyant manners, and highly developed promotional methods to become the most popular evangelist of his time. 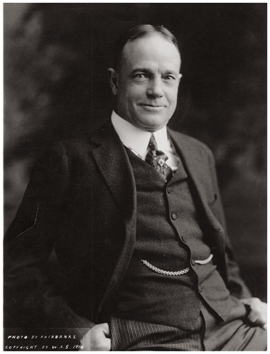 Ministry and Impact:    Billy Sunday really got his start in ministry in 1893, became the full-time assistant to J. Wilbur Chapman, one of the best-known evangelists in the United States at the time. Sunday's responsibilities as Chapman's "advance man" were to precede the evangelist into cities where he was scheduled to preach, organize prayer meetings and choirs, erect tents (when necessary) and take care of the various and sundry additional requirements of a traveling ministry. By listening to Chapman preach night after night, Sunday received a valuable course in homiletics. He was also given explicit instruction by his mentor, who critiqued Sunday's own attempts at evangelistic preaching and showed him how to construct a compelling sermon. Further, Chapman encouraged Sunday's theological development by emphasizing the importance of prayer and by helping to "reinforce Billy's commitment to conservative biblical Christianity."

When Chapman unexpectedly returned to the pastorate in 1896, Sunday struck out on his own, beginning with meetings in tiny Garner, Iowa. For the next twelve years, Sunday preached in approximately seventy communities, most of them in Iowa and Illinois. Sunday referred to these towns as the “Kerosene Circuit” because, unlike Chicago, most were not yet electrified. Towns often booked Sunday's prayer meetings informally, sometimes by sending a delegation to hear him preach or by telegraphing him while he was holding services somewhere in a nearby community. It was here during this time that The Lord opened the doors for Billy Sunday’s ministry to start to flourish.

Billy Sunday’s impact on the body of Christ was exponential for his time. Over the course of his career, Sunday probably preached to more than 100 million people. The vast numbers who "hit the sawdust trail" were so remarkable for that time period. Although the usual total given for those who came forward at invitations is an even million, one modern historian estimates the true figure to be closer to 1,250,000. Before his death, Sunday estimated that he had preached nearly 20,000 sermons, an average of 42 per month from 1896 to 1935. During his heyday, when he was preaching more than 20 times each week, his crowds were often huge. Even in 1923, well into the period of his decline, 479,300 people attended the 79 meetings of the six-week 1923 Columbia, South Carolina campaign. That number was 23 times the white population of Columbia. Sometimes whole groups of club members came forward in masse at Sunday's prodding. Undoubtedly, some audience members were just so awe struck with Sunday’s anointing, that they simply just wanted to shake the famous preacher's hand. With his universal appeal and his unapologetically vigorous and bombastic homiletic style, Billy Sunday has gone down in history as one of Gods great generals.

Family Life:   Billy Sunday married Helen Amelia Thompson on Sep. 5 1888 in Dundee Illinois. According to an oft-repeated story, Helen said that she met Billy Sunday at a church social shortly after his conversion to Christianity. William Thompson at first objected to the noted White Stockings baseball player becoming the suitor of his daughter, but later soften as he saw his love for her and the lord. Billy and Helen had four children together, 3 boys, and 1 girl.

With an extremely strong marriage, and such deep love for one another, eleven years into Sunday's evangelistic career, both he and his wife had been pushed to their emotional limits. Long separations had exacerbated both the preacher and his beloved. With his ministry expanding, meaning that Billy needed an administrator—a job that would ideally suit his practically-minded wife. As a result, in 1908 the Sundays decided to entrust their children to a nanny so that Nell (Helen) Sunday could manage her famed husband's revival campaign. As a result, Mrs. Sunday transformed her husband's out-of-the-back-pocket organization into a "nationally renowned phenomenon." New personnel were hired, and by the New York campaign of 1917, the Sundays had a paid staff of twenty-six. Their organization included the standard employees (musicians, custodians, and advance men), but also some innovative positions whose inclusion was prompted by the couple's unique vision of their ministry. Most notably, the Sundays hired Bible teachers of both sexes, who, among other responsibilities, held daytime meetings at schools and shops, and encouraged their audiences to attend the main tabernacle services in the evenings. With his wife administering the campaign organization, Sunday was free to do what he did best: compose and deliver popular sermons.

By 1910, the Sunday’s began to conduct meetings (usually longer than a month) in small cities like Youngstown, Wilkes-Barre, South Bend, and Denver, and then finally, between 1915 and 1917, the major cities of Philadelphia, Syracuse, Kansas City, Detroit, Boston, Buffalo, and New York City. Throughout this decade, Sunday was front-page news in the cities where he held campaigns. Newspapers often printed his sermons in full, and even during World War I, local coverage of his campaigns often equaled or surpassed the media attention received by the war. Sunday was the subject of over sixty articles in major periodicals, and he and his wife were a staple of the religious press everywhere regardless of the denomination. 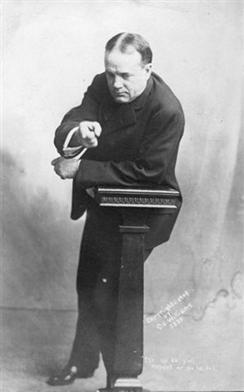