You are not of this world part 1 How often do we read the word, and the words mean nothing to us? This happens more than you might think. It happens as a result of one of two things: One, you are reading to read, and you are not getting the meaning. Two, you have forgotten that… Every Word written in the Bible “…IS Life everlasting…”,(John 12:50), because it was spoken by GOD. Let us take a closer look at the verse so often ignored. "… You are not of this world, even as I am not of this world…" (John 17:16). How can that verse be true? You see, the implications of its validity are indeed great. Up to this point, you have seen yourself as the person in the mirror and all that that entails. But if you are not of this world, then who are you really? Before we answer that, let us take a moment to think on the reality that you are not of this world. If we consider that God's Word is true, then we will also have to consider that every Word spoken in the Word must also be true. Otherwise, if we can question one Word, that we must question all the Word. However, once we do that, we throw away the very basis of our faith which is the Word of God. Plainly stated, apart from the Word of God, we have no record of God the Father, God the Son, Or God the Holy Spirit. So if we are to say that one Word in the Bible is false, than we also must say the entire book of Scriptures is a farce. Can this be true? The Word of God is foolishness to man. If you associate yourself with "man", then you cannot receive or believe anything in the Word of God. But if you are bold enough to say I believe anything in the Word of God, then you must also be strong enough to receive it. You must also then be willing to renew your mind to it. Otherwise what is the point? You are just playing religion. Its really no different than that of Muslims, Buddhists, Mormons or idol worshipping tribes. The thing that seperates us from the other religions is that we are part of the Family of God. But, do you believe that? You are at a crossroad, if we are going to believe the Word, then we must renew our mind to what it says. So if, “…you are not of this world”, what ARE you going to do with that? If John 17 was talking about future tence, then we could write it off as something that would take place after death. But John 17 IS dealing with present tence, which means you are not of this world, Now! Which means the things of this world, its systems, its functions, its problems, its sicknesses, its lack, its fear, its worry and all the broken systems, can be overridden by “…you are not of this world”. It says in 2nd Corinthians 5 that we are Ambassadors of Christ. The word [ambassador] implies that we must be some place else. Like the US Ambassador to England or to Japan. That Ambassador is not held to that country’s law, but rather still function under US law. So if we are not of this world, the natural laws of this world do not pertain to us. When those laws violate spiritual law, spiritual law overrides them. Now is that to say we are to break natural law when concerning the laws of the land, of course not. It is pertaining to the things that exalt itself up above the Word of God. Things like sickness, fear worry, lack and any other laws to go contrary to the Word of God. If you are not of this world, but your mind is renewed to this world, then you are captive to thisworld systems by your own chioce. That’s why Romans 12:2 is so important. “Be not conformed to this world but be transformed by the renewing of your mind…”. If we take the time to renew our minds to, “that we are not of this world” then we will begin to understand that the Word of God will overtake every natural law, and will bring that natural law under subjection to God. “You are not of this world” if we look at that at face value, then where are we from? I’ll deal with that in part two. 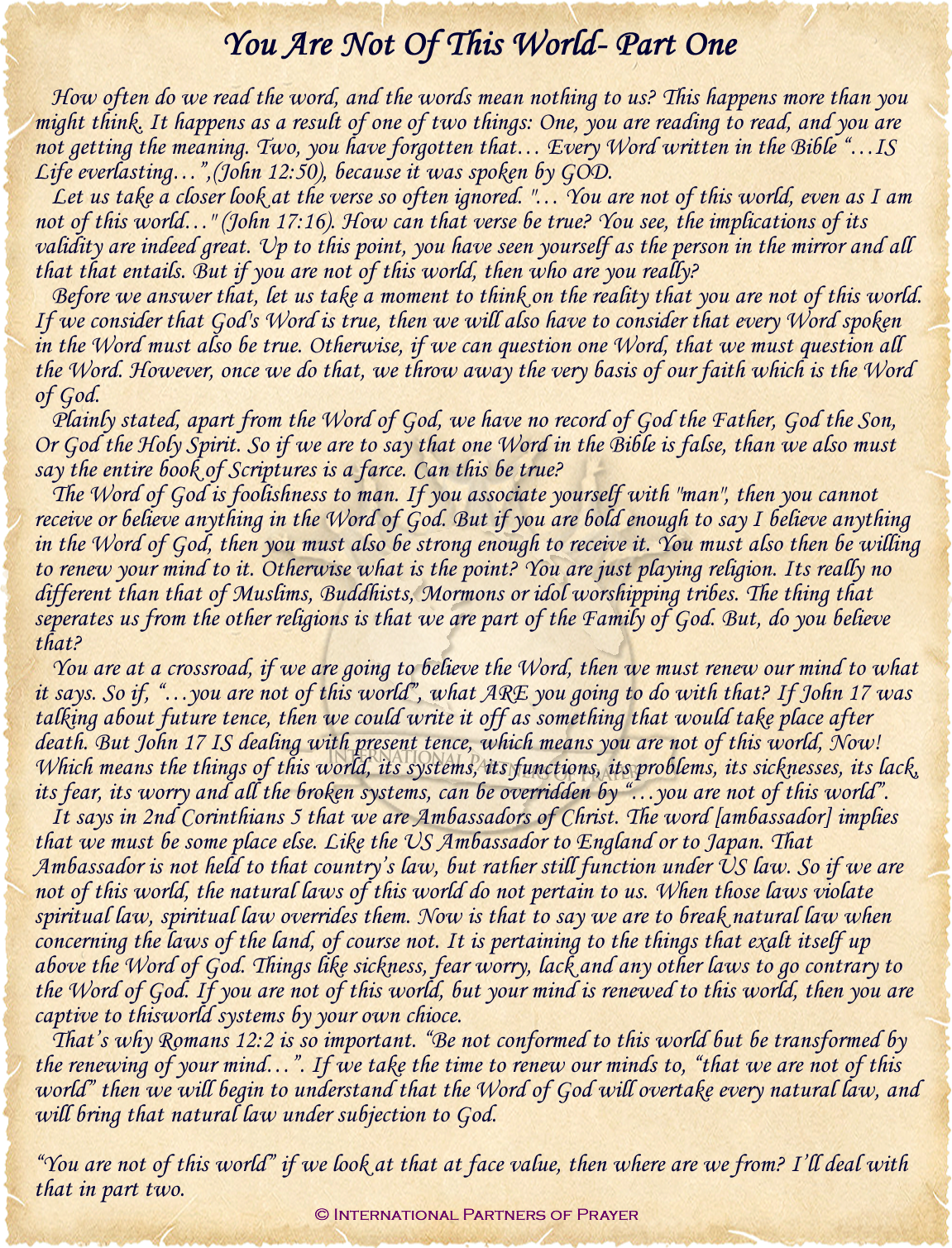