Studying His Word Correctly What is the proper way to study God’s Word? Many of us could say that studying the Word of God is much like studying a text book. Perhaps when we read the Word of God, we lack understanding and purpose as to what the text was saying… Sometimes you pick it up and wonder where to begin or where to go. Frustration sets in and you eventually put the Word of God down. Maybe you’re a pastor or minister, so when you study the Word, you study the Word for the purpose of preparing a message or lesson for the people you are instructing. Or my favorite, you open up the Word wherever it lands, and hope God is going to say something to you. But all those methods are incorrect. You see, God is a Spirit and His Word was given by the Holy Spirit and all things in the Word must be accessed by faith before they can be received intellectually. Case in point: Do you remember when you got saved? Maybe you were shown the plan of salvation by a friend or under the teachings of some pastor. Maybe you found it while studying the Scriptures. “if we confess with our mouth and believe in our hearts, we shall be saved”. How did that Scripture become a reality in your life? Did it become a reality because you intellectually understood it or did it become reality because you received it by faith? The answer is that there is nothing of God that can be understood intellectually without first being received by faith. If you were, for example, to study the plan of salvation and try to get that to reason with your intellect, you would never be able to receive salvation. Why?, because the flesh is at war against God, (Romans 8:7). To explain further, “…For I know that in me [that is, in my flesh] dwelleth no good thing” (Romans 7:18). Therefore, anything from the scriptures that you can derive on your own intellectually, will at best; be polluted by sin tainted flesh. There is no way for your mind to comprehend the things of God, because your mind is in the fallen body. So what then is the answer? How can we, in the fallen body, ever expect to learn anything from God? The answer is…Faith. It is the only element that was not included in the fall of man. Everything that belonged to Adam in the natural realm was transferred over into the hands of Satan, the moment Adam touched the fruit. So everything in the natural realm fell under the curse of the law. But faith can only be found in the spirit; therefore, it was not included in the fall. That is why that today when you understand or receive anything from God, it must be done so in faith. Why do you think all your studying of the Word of God, has still resulted in your Spiritual failure? In other words, you still struggle with sin or lack or health issues. Surely the Word of God is capable of overturning all of these things in your life. So why hasn’t it? Because all the promises of God are yes and amen, the only reason for failure is that you have been trying to intellectually study the Word of God and then try to change, rather than receiving the Word of God by faith and letting it overtake your life through the Spirit. There is nothing in this natural realm that cannot be overtaken by the Word of God if you want to know how to properly study, before you begin your study, find the thing in your life that you want changed, receive it by faith, then study. It will open doors of intellectual increase and bring permanent change in your life. The Word that you read, instead of struggling over its meaning, will illuminate in your heart and in your mind. Faith, what an amazing thing!!! 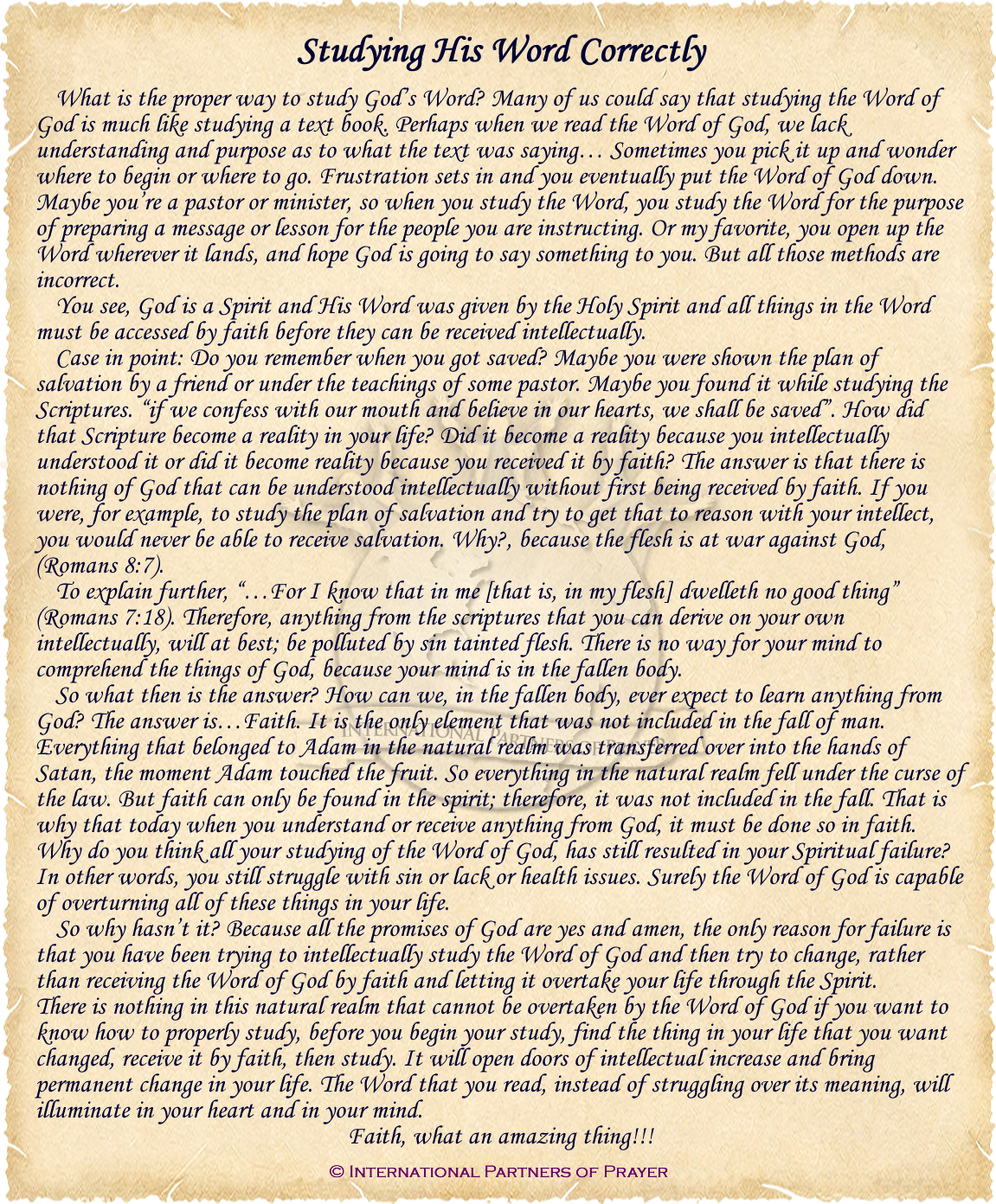